Oct 25, 2016  ·  edit
really liked it
Read from August 12 to October 25, 2016
This book takes the reader on a world tour of adventure, angst, and betrayal. Elaine is a brilliant, talented young woman who devotes her life to extracting revenge for her father, who sacrificed his life to give her a better one. Her plans lead her through the Secret Service training ground, where she makes a valuable contact in the Treasury Department. This contact may be her salvation when her new posting in Bulgaria brings her into contact with a treasonous agent who toys with her affections and draws her into his schemes. The story, part of a series, ends on a big cliffhanger.
I found myself drawn into the story quickly as this young woman, overcomes one obstacle after another in her quest for revenge, success, and love. I would recommend this book, and this series, to anyone who enjoys reading of strong heroines and intrigue.
Advertisement

It started as a response to fear.  In October of fifteen years ago, the nation was still reeling from the shock of terrorist activity in New York and Pennsylvania.  Parents were worried about letting their children out of the house for school, much less for such trivial things as trick-or-treating.  Should they allow fear of the unknown to dictate their actions, or take a stand?   Was keeping a sense of normalcy for their children important enough to risk allowing them out for time-honored traditions?

Many groups sponsored events as alternates to the usual activities.  Schools and church groups offered “Autumn/Harvest Celebrations” on the night of October 31st to sway parents and children to safer venues than roaming the streets.  Some of these included “trunk-or-treating” in lit parking lots where large groups theoretically meant security.

It was in this atmosphere that my family chose to host a gathering of family as an alternate to allowing our children to go out.  We had decided that being cautious did not mean we could not have fun with our loved ones.  To our delight, it also became one of the best Halloweens we had ever celebrated.

We lived in a small apartment at the time, but we used candlelight and a set of Halloween lights to the exclusion of all other sources to generate a spooky atmosphere.  Skeletons hung from doors, and bats from the ceiling.  We carved our own pumpkins, and set up the entire place to accommodate a group of various ages with games and fun.

Costumes were mandatory for anyone children, and encouraged for adults.  We played CDs of spooky sounds and seasonal playlists.  Watching my husband dance in the kitchen (the only portion of the apartment without carpet) to “Monster Mash” surrounded by small “monsters” was one of the highlights of the night.

We served treats straight from women’s magazines like mummy dogs and candy corn fudge.  Craft projects quieted the rambunctious cousins for a short time, before adults were pressed into service to hand out candy at every odd corner and doorway in the apartment.  By the time everyone was stuffed and reasonably worn out enough to enjoy a spooky story; we had realized we were having far more fun than just walking door to door.

That night was so successful we decided to make it our own tradition.   Eventually we moved to a bigger place, and were able to host a larger gathering, with separate activities for younger children and adults.  And though the gathering place and the guests changed, what remained the same was the fact that it was always a family activity, from decorating the house to choosing “spooky” dishes to make, from arguing over favorite candy to creating a cemetery in the front yard.

Our kids are grown now, and are usually too busy with work or school to celebrate Halloween.  We still spend time with each other when we can, and share a rich bond over the shared experiences of their childhoods.  After all, that was the entire point-to be together, and make memories that will last a lifetime.

I hope you and yours have a very Happy Halloween.

When the leaves start changing and the temperatures drop to a pleasant coolness; when the stores start displaying fall (and Christmas!) merchandise and numerous TV stations begin playing marathons of spine chillers, it’s then that I like to contemplate my favorite supernatural beings.  There are so many monsters of myth, legend, and modern day media, that it’s easy to find one suited to frighten each individual taste.  What all these spooky superstars have in common, though, is that we admire them for their ability to scare us, to make us want to sleep with the lights on, to cover our faces when they do their horrible deeds on camera. 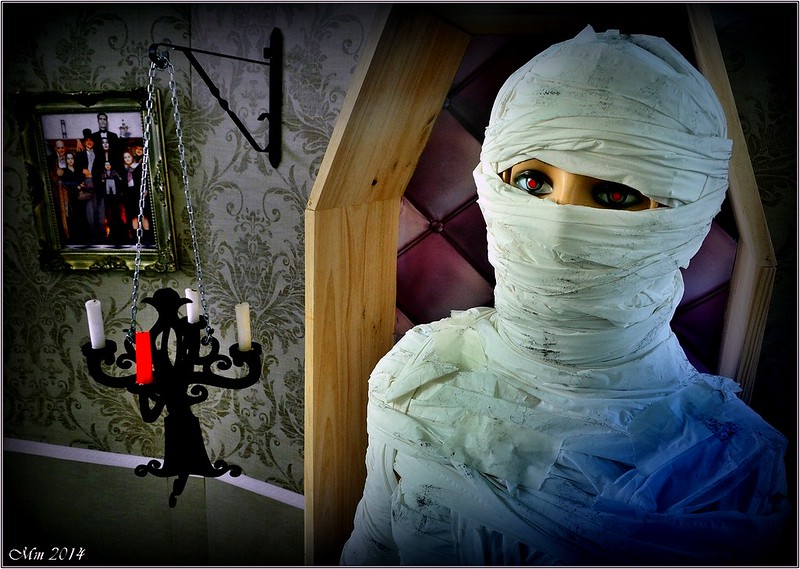 Numerous books have been written about localized monsters and regional legends, such as the Ohio Grassman and the Jersey Devil, but none of the creatures have achieved the fame, and the notoriety, of a few types of general supernatural monsters.  It’s these I want to focus on as I share my favorite few:

Vampires. I used to watch old vampire movies on Saturday afternoon when I was a kid, and ended up scaring myself quite a bit.  It didn’t matter that many of the earlier movies were in black and white, because it was not the blood itself that was scary, but the suspense that came with knowing the hero was being stalked by a killer that could enthrall and kill in equal measure.

Of course, vampires are more popular than ever, thanks to modern books and movie sensations such as the Twilight series, as well as Blade and Underworld.  While these supernatural creatures are portrayed in vastly different way by the different series, they all share an appreciation for these undead, immortal beings who exhibit some of the darkest and basest urges of humanity.  The vampire is a being that is seductive to the extreme, and yet it is a slave to its own urges, its desperate need for that which keeps us alive.

Mummies.  The mummy is a fictional monster unwittingly created by long-past civilizations in an attempt to find meaning in life and death.  The most famous are the Egyptian mummies, which Hollywood has exploited numerous times to bring horror, coupled with romance onto the big screen. Mummies are creepy in a whole different way than vampires.  They’re generally slower than vampires, and rarely speak, but the idea of a creature come back to life after decaying in a tomb for thousands of years, perhaps seeking a companion to return to the darkness, is terrifying in its own right.

I’ve always been partial to mummies as a horror character, and one of my all-time favorite movies is The Mummy (1999) starring Brendan Frasier and Rachel Weisz.  This particular movie mummy scared me tremendously the first time I saw it, but in watching the movie repeatedly I became inured to the “fright” aspect of the movie and was able to enjoy the plot, the humor, and the romantic elements this particular version contained.  In fact wrote a post back in April of this year entitled “Everything I Need to Know about Life I Learned from Watching The Mummy.”  Anyone interested can check out the link to that post here:

Zombies.  The once-mindless creatures of science and nature gone insane in “B” movies have come into their own with TV shows such as The Walking Dead and movies such as World War Z.  Zombies are in some ways are creepy than other monsters because anyone can become one, and unlike other types of scary monsters, they tend to overrun entire populations.  The concept of a mutant virus, either natural or manmade, that can turn anyone and everyone it infects into a mindless drone with only one instinctive urge, to eat human flesh, is in many ways the most horrifying fictional monster around.

I personally would rather become just about any other type of monster than a zombie, and I think it’s the one I would least like to encounter.  There’s nothing romantic or thrilling about being, or being pursued by a zombie, because they of all monsters lack the most in human traits.  They are simply reduced to one instinctive drive, and heaven help anyone in their way.  While they may retain in many ways the basic shape of humans, they are really a lower form of life.  Without the ability to think or reason they are more like a virus themselves than human.

What is your favorite monster?  There are so many others out there, and with Halloween right around the corner, it’s the perfect time to get reacquainted with old favorites and discover new ones.  If you’d like to share, send me your comments to the link on this page or my twitter account at the bottom.

The Internet has changed our lives forever, and mostly for the better.  However, it is very easy to allow its influence to overwhelm us; to the point we all but forget that there is actually life outside of the digital screen.  Based on observations I made this week, I thought I’d share a list of signs that perhaps it’s time to unplug:

I personally rely on the Internet daily for so many things, including my livelihood, so I would never suggest it’s not a good thing, but like so many good things, it can be used in excess.  Take time to unplug, and remember there’s a whole other world away from the screen.