Some interesting thoughts on the title of the newest addition to a franchise-with no real spoiler alerts for those who haven’t made it into a theater yet this season!

The latest Star Wars move, Rogue One, is out this week. The director, Gareth Edwards explained that its title functions as a military call sign, like Air Force One, and alludes to the Rogue Squadron and Rogue Group, an important troop of Rebel fighters in the original Star Wars films. (Rogue One features Rebel spies.) Edwards also said the title nods to the fact that his movie is the “rogue” one: the first standaloneStar Wars film outside the main storyline.

So that’s how Rogue One came to be so called, in part. But how did rogue get its name?

The Oxford English Dictionary (OED) first documents rogue, as roge, in 1489, when it referred to a “vagrant.” Over the course of the 16th century, the sense of rogue shifted. By the 1560s, it referred to a “scoundrel,” by…

To all those out there, may you experience peace and joy this holiday season, and the very best wishes for a Happy New Year.

Not to brag, but I’m in a good place.  I’ve finished my holiday mini-breakdown and survived the stress of more-things-to-do-than-there-is-time for another year.   Of course, I got an early start.  I was already agonizing about gifts in September, so I’ve had plenty of time to work through the pressure and guilt of wanting to make the perfect holiday for my family.

Why do we put ourselves through this anyway?  Why is every holiday a competition, either with family and friends, or ourselves, to see how we can improve upon gifts, decorations, food, or numbers of obligations over what we accomplished last year?  And have we really lost sight of the real meaning of the holidays, in our overwhelming commercialism?

Some of us, and I have been guilty of this myself; stress ourselves out too badly to actually enjoy the season.  If you’re not one of those lucky individuals who seem to thrive on stress, I say it’s time to give yourself a break.

It’s time to step back, take a deep breathe, or several, and think about what is truly important.  What is actually necessary to make our holidays meaningful, and what can we simply let go?  Prioritize.  Do your kids always ask to make a gingerbread house with you but you can never seem to find the time?  What other activity could you let go to make their wish happen?  Kids grow up too quickly; it won’t be cool to decorate cookies with you forever.

Find ways to “cheat” on holiday chores you don’t enjoy, or that don’t have as much meaning for you.  Consider holding or attending one less function, or not making every food item from scratch.  It’s perfectly okay to use mixes, or order food from the deli or a restaurant if it eases some of the burden we put upon ourselves so we can actually enjoy our holiday parties.

Take time to do the things you love, with the people you love, and consider what is actually meaningful to you.  Do you have a favorite Christmas movie?  Why not plan a Christmas theme movie night?  It’s just the thing to help you unwind after a long day of work, shopping, and dealing with traffic and holiday crowds.

Above all, take the time to breathe, relax, and remember the true meaning of the holidays-the spirit of love and generosity, the quality time to spend with loved ones, the joy and camaraderie to share with family and strangers alike.  This is the time of year “when we all act a little nicer, we, we, we smile a little easier, we, w-w-we, we, we cheer a little more. For a couple of hours out of the whole year, we are the people that we always hoped we would be!” (Frank Cross in Scrooged, 1988).

Merry Christmas and Happy New Year to you all!

This is the time of year when many of us begin to think about New Year’s resolutions-“I’ll start my diet,” or “I’ll pay off my credit cards right after the holidays are over.”  But is the concept of making a resolution a good idea or not?  It really depends on the individual. 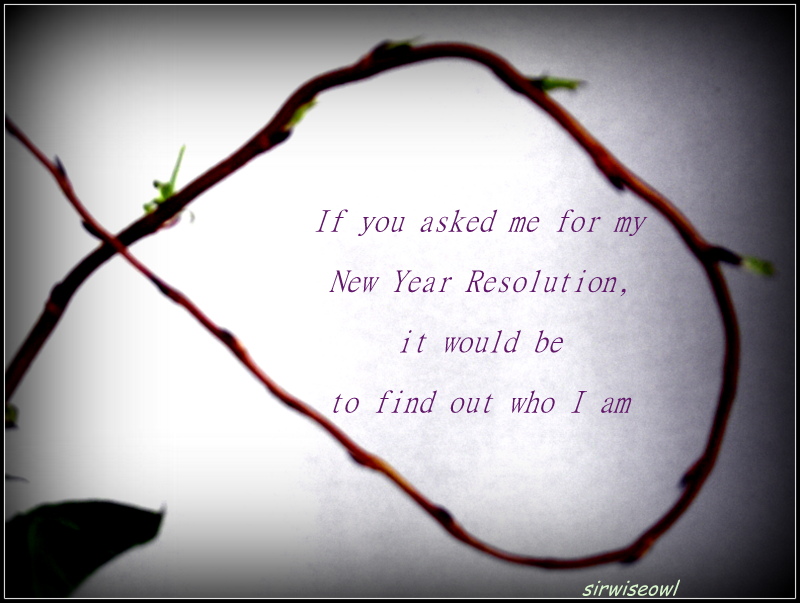 In the best scenario, resolutions can translate into commitment.  Someone sets a goal with a genuine desire to take action, to better their lives in some way, and uses the January date as a deadline to act.  In this way, the concept of “resolution” is a genuine benefit, because this person chooses to make it so, at least in the short term.

Unfortunately, though, a resolution could simply become a means of putting off responsibility to working towards worthwhile goals-“I know I need to make this change, but instead of starting now, I’ll do it later.”  Of course, despite best intentions, sometimes “later” never comes.  We are left with an idea for change, for improvement, that never reaches fruition because it never became a reality.

Even if a resolution is made and begun in good faith, many of us tend to allow our motivation to falter over time.  Resolutions usually involve change, which we naturally resist if we are not consistently and continually conscious of our actions.  “To err is human,” is Alexander Pope’s famous quote, and that applies to each of us.  Without a great deal of determination and self-control, no good resolution will endure the test of time.

So with all the inherent problems in keeping them, is the act of making resolutions still worthwhile?  What strategies can help insure their success?

Resolutions can be a positive force for change, if they are embraced as such.  Don’t just decide you want to make a change.  Actually plan how you plan to accomplish your goal.  Do you want to lose weight?  What steps will you take?  Do you want to get out of debt?  What is your financial plan for the year?  Write it all out and place it where you will see it every day and can cross off one step at a time.

The best thing you can do to insure you succeed, other than planning, is to get support.  If possible, secure a support system to go along with your resolution.  The encouragement of loved ones will keep you moving toward your goals like nothing else.  Consider having a buddy to share your goal with, so you can commiserate, and triumph together.

So what lofty resolutions do I have for myself for the coming year?  I have a book that is undergoing revision, which will hopefully be coming out soon.  I want to continue to build the new career I’ve started for myself, which will require a stringent use of time management to balance work and home life.  I would like to spend more quality time with my husband, to travel, to work out more, to be more kind and gracious towards everyone I meet.

Wish me good luck on my resolutions, and I’ll do the same for you!

Probably like many of you, I’m running around half in panic mode thinking about all the things I have to accomplish in the next nineteen days (?) till the big holiday at the end of the month.   As I plan menus and check my stock of wrapping paper and Christmas cards, I can’t help but compare my own family’s festivities to those that I hear and see everywhere I turn-technicolor fantasies played out in holiday movies, and described in literally every song on certain radio stations. While I certainly hope I could describe our celebrations without resorting to tired old clichés that everyone has heard before, it’s hard to ignore the appeal of the familiar icons.

I’m dreaming of a white Christmas.  Sure, snow is pretty to look at if you can stay at home, but it’s not very much fun to drive through in Cincinnati.  Not that we have much of the white stuff for Christmas anyway.  So far this month has actually been pretty gray and yucky here.  On the other hand, the movie White Christmas is one of my all-time favorites, which I have to talk my family into watching with me.

It’s beginning to look a lot like Christmas.  Okay, this reference is pretty vague.  Does this refer to the weather, or the fact that stores everywhere have had Christmas merchandise on display for a while, in some cases since before Halloween?  Or does it refer to the decorations our neighbors have lately placed on their house fronts and properties, or some other clue of the season? I guess this is a pretty personal declaration, intended to mean something different to everyone who hears it.

You better watch out, etc.  This one is something that I know I was as guilty of as every other parent-trying to curb my children’s behavior by threating them with a visit, or lack thereof, from Santa Claus.  Not that they ever believed me, the smarty pants.

He’s making a list.  Big deal.  I’ve never worried very much about being on someone else’s imaginary list.  I make lists all the time.  It’s the only way I can remember to get everything done and avoid driving myself crazy trying to remember everything.  There’s something therapeutic about crossing items off of a to-do list when Christmas shopping or planning a big family dinner.

It’s the most wonderful time of the year.  While this is certainly true for some, many others out there don’t share that opinion either because they do not celebrate the holiday, or because they lack the means to do so.  This is an especially important time of year to remember those less fortunate, and to find in our hearts the motivation to help those around us who are less fortunate.

Deck the halls.  I admit I have way too many Christmas decorations stored in our basement.  We’ve added to the collection every year, and after twenty-six years of marriage, my husband and I have accumulated so many decorations that every year we simply pick and choose which of them to put out.  Should we get rid of some of them?  Maybe, but that’s not happening until we can pawn some of them off on the kids.  After all, they have sentimental value.

Have yourselves a merry little Christmas.  To me that says a happy, quiet holiday, preferably at home, surrounded by family.  Again, this is probably something everyone has their own personal definition for, and many of us would rather think “bigger is better” and be set on topping last year’s celebrations.  Not that there’s anything wrong with that, of course, but personally I would rather cut down on some of the hoopla and stress so I can actually enjoy the time with loved ones, rather than spending too much money or all my time in the kitchen.

However you choose to spend your holidays, make it personal, and spend it with those you cherish.  I can’t resist leaving you with one last cliché, though, “to all a goodnight.”