As long-time readers of this blog will know, I can never get enough of strong female characters, whether in books, movies, or on TV. Thanks to James J. Cudney from This is My Truth Now for this post highlighting four such heroines in fiction, with excerpts chosen by their authors. Check out their books online, or in your nearest bookstore!

Those readers who’ve followed this blog for some time know that I occasionally write a piece about strong female characters, the kind that star in action movies or solve crimes or just go toe-to-toe with their male counterparts.  Today, I decided to take a look at the other side of things, those strong female anti-heroes.  These ladies definitely stand their ground; they just do so for their own gain, or on the side of evil.  In no particular order:

The Borg Queen, Star Trek: First Contact.  This ruler of a cyborg race threatening the galaxy with “assimilation” routinely gives orders that overrun planets and turns sentient beings into mindless drones, but she still understands emotions well enough to sway both Captain Picard and Data with her feminine wiles, pitting them against each other in a deadly conflict that could mean the end of the Enterprise and its crew.

Bellatrix Lestrange, Harry Potter and the Order of the Phoenix, et al.  One of Lord Voldemort’s most sadistic followers, Bellatrix is an evil unto herself.  She tortured Neville Longbottom’s parents into insanity, a fact she can’t help rub in his face, and tried to kill Harry before sending her own cousin into the Veil of Death.  She has no scruples, and even a stay in the worst prison of the wizard world can’t dim her thirst for mayhem. 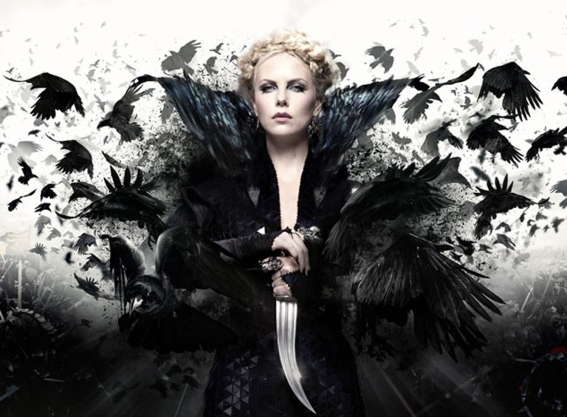 There have numerous retellings of Snow White, but no Queen is more evil than the version portrayed by Charlize Theron in Snow White and the Huntsman.  Queen Ravenna, in true fairy-tale fashion, drains the youth from young women in her kingdom to maintain her own youth and beauty.  She murders the king on their wedding night, and imprisons his daughter in a tower.  She then lures the huntsman into doing her bidding with promises to raise the dead, and aspires to eat Snow White’s heart to become immortal.

Harley Quinn, Suicide Squad. This completely certifiable femme fatale is the Bonnie to The Joker’s Clyde.  A former psychiatrist, she gives up sanity and morality for the sake of the man she calls “puddin.”  She is the ultimate crime moll whose weapon of choice is a baseball bat, and has no qualms about using it on anyone who gets in her way.  She is violent, dangerous, and perfectly capable of smiling at someone while she kills them where they stand.  Don’t get in her way.

Delores Umbridge, a politician who makes her debut in Harry Potter and the Order of the Phoenix.  This witch, who dresses in all pink and decorates her office with plates covered with cute kittens, has an evil smile and a giggle that would not be out of place from a villain in a horror movie.  She pretends to be a friendly, mild-mannered government servant until someone disagrees with her, or her beloved minister, then anything goes, from illegal artifacts to outright torture and attempted murder.

Hela, Thor: Ragnarock.  The god of thunder’s long-lost sister wants revenge for her imprisonment, and to take her father’s throne.  When Thor and the citizens of Asgard disagree, she starts killing off the population, and resurrects the dead warriors of Asgard.  She puts her little brother in his place by destroying Thor’s hammer and putting out his eye.   Why? Because she carries a grudge against their deceased father and she has to show little brother that she is more powerful and deserves the crown more than he.

What all these women have in common is that they have chosen to a life filled with violence, with evil, with violence.  They may be lacking in morals and even humanity, but they prove that they are just as capable and strong as their male counterparts.

Who is your favorite female villain?