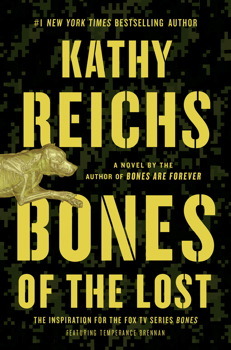 Amy Caudill‘s review
Jul 25, 2017
Kathy Reichs is not a paranormal writer, but the dead speak to her anyway. Both Reichs, and her main character, Dr. Temperance Brennan, are forensic anthropologists who examine the remains of unexplained deaths and allow the bones of these bodies to tell their story.
In the 16th installment of Reichs’ series, Bones of the Lost, Brennan is assigned to examine the remnants of a set of mummified dogs that have been smuggled from Peru, and sent to the Charlotte-Mecklenberg coroner’s office in North Carolina for examination and confirmation. At the same time, the remains of a young, unidentified hit-and-run victim are brought in. Little does Brennan expect at the time, but these two cases will prove to be linked in a story that takes her from North Carolina to Afghanistan and back.
Brennan becomes the victim of a vicious, mysterious attacker as she uncovers evidence of murder, prostitution, and human trafficking. She faces danger head on, with the support of Detective Slidell, and her ex-husband Pete, who may or may not be interested in competing for her affections against off-again ex-lover Ryan.
Brennan is deeply passionate about both the victims she examines and those she may be able to help prevent landing on her morgue table. Reichs’ story touches a number of current social issues, from the war and gender discrimination in Afghanistan, to the rise in human trafficking, complete with relevant data and figures. Reichs’ true-life experiences with the subject matter show vividly in this compelling story that was difficult to put down until I’d reached the end.